How to Test Private Services in Symfony

After trying all the options in this post I settled down with simple solution:
public: true in all my configs.

The only approach that works out of the box and requires 0-setup.


2 versions of Symfony are affected by this dissonance between services and tests. Do you use Symfony 3.4 or 4.0? Do you want to test your services, but struggle to get them in a clean way?

Today we look at possible solutions.

That's ok until you need to test such service:

When we run the test:

This exception will stop us:

Down the Smelly Rabbit Hole

As you can see, we can load dozens of service from App\ by 2 lines. But to test 1, we need to add 2 extra lines to config.

This is one to many code smell.

Also, we can extract it to test config tests/config/config.yml, so it's easier to hide the smell.

Or just make everything public, like I did in Symplify 6 months ago:

But Symfony folks will not be happy to see this, because they need people to use private services. Why? So they learn to use constructor injection in services instead of $this->get(...). So how should we do it the Symfony-way?

We're not alone asking this question. There are over 52 results for "symfony tests private services" on StackOverflow at the time being: 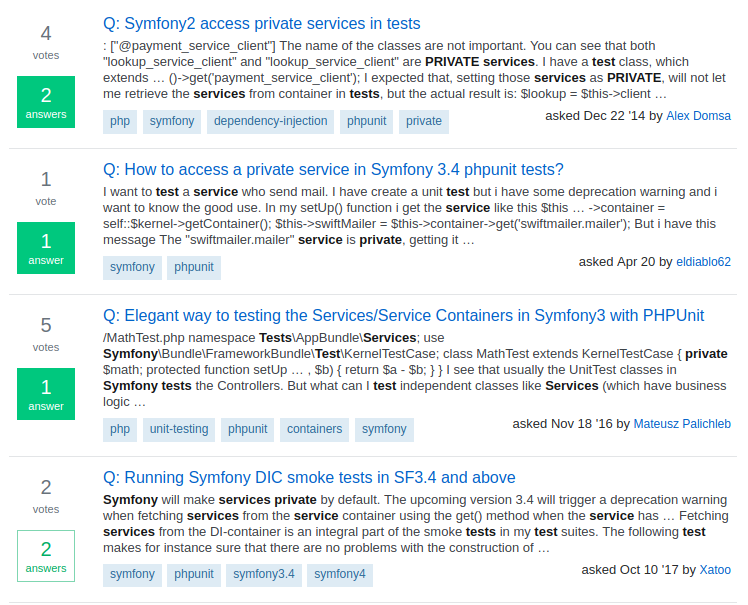 But what saint options we have?

This is now fixed in Symfony 4.1 with Simpler service testing.

for your tests? Just upgrade to Symfony 4.1 and you're done.

But if you create open-source, you usually stick with last LTS, Symfony 3.4. How to solve it there?

It's reasonable we want to keep all configs untouched, no matter if we're in dev or tests.

And tests as well:

If there would only be one place with a switch, that would make that all code smells go away and let us test. That would be awesome, right? How can we achieve that? Any ideas?

Compiler pass allows us to write nice, decoupled and reusable code. After all, the solution for Symfony 4.1 is done by a compiler pass, that creates public 'test.service-name' aliases.

Let's create one for our PHPUnit test cases:

And register it in our Kernel:

This removes all public: true lines from all your configs. 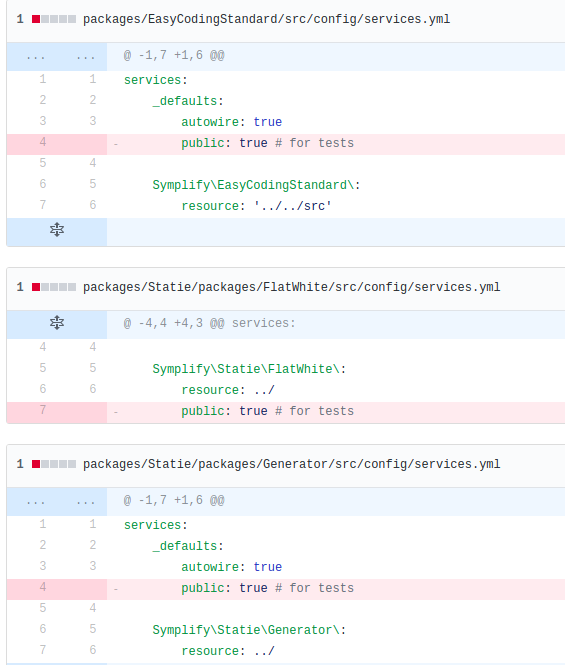 It is. But in 6 months of using this method I got different feedback from the PHP community:

People were confused 😕🤔. The trade of compiler pass feature was putting too much knowledge pressure on the programmers. The application uses constructor injection everywhere, so there is no real added value by working with term public/private services.

In the end I removed the compiler pass and moved back to public: true in all configs right bellow autowire: true:

Thanks to that, the whole process became clear:

Read next → How to Load --config With Services in Symfony Console