New in Symplify 5: Create, Merge and Split Monorepo with 1 Command

Removed the deprecated split command. Use faster and reliable GitHub Action instead.


Do you want to create, validate and manage your monorepo like a pro? There is no science behind it, just a few routine steps that you need to repeat.

And now there is a tool that will handle these steps for you.

This package was initially released in Symplify 4.5, but it took some time to test in practice, remove WTFs and be sure it contains all people need.

Now there are 7 commands in total, but today we'll focus on the 4 most important ones.

First, install this package to an empty repository:

You'll run this command just once to create a monorepo in the empty repository.

It will prepare basic monorepo structure with 2 packages:

Is that unclear to you? Don't worry, you'll see how it works in merge command below.

This command will tell you if your dependency versions are the same in every packages' composer.json and in root composer.json. 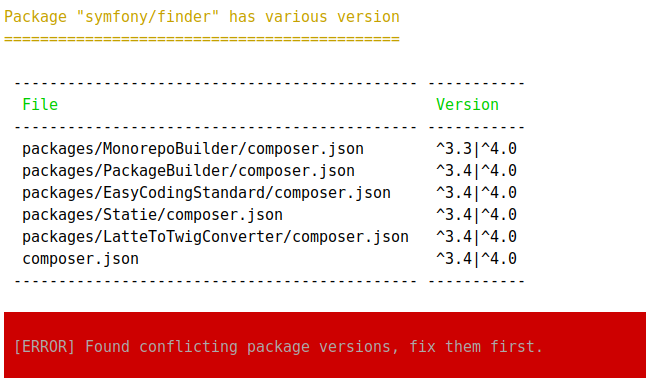 You don't have to run this command manually since it's included in the next one.

Here you'll understand the magic from init command. With merge command, the Monorepo Builder will join all packages' composer.json - after validation of course.

And what about extra dependencies like PHPUnit, coding standards and static analysis?

That's what data_to_append section is for. These packages and versions will be added to composer.json.

Btw, all packages are nicely sorted by name so you always find them quickly.

Do you Want to Know More?

and read README for detail usage and tricks.

Read next → 7 Tips to Write Exceptions Everyone Will Love