Fatal error: Uncaught Error: [] operator not supported for strings in

For the rest of you, what will you do when PHP will tell you the message in the title?

The most important info from PHP.net nowadays

You see all this social boom, your boss is scared by "no security support" and you finally have a go to upgrade your PHP code to PHP 7.1. You upgrade your PHP locally to see if everything works:

You're probably thinking lets jump to PHP 7.2, while you're at it:

Don't do it, always jump by minor versions - for both PHP and packages.

Actually, when you see a message - that's a good sign. How else would you notice this? 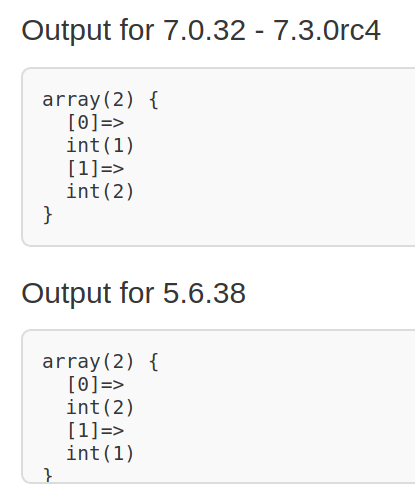 But let's say you know that "Deprecated: The each() function is deprecated. This message will be suppressed on further calls in" means refactor each each() usage to foreach().

(Often it's more complicated, but keep this simple for now.)

Some cases are easy, if your variables are well-named:

But some... how would you change this one?

Are you sure? I think it should be like this:

Honestly, I'm not sure either. But I took time to test all possible each() combinations with list(), while() and do/while, put them into awesome 3v4l.org, wrote a bunch of tests and wrote tested rules for Rector.

How Rector got into pure PHP Upgrades

At the PHP Asia Conference Rasmus Lerdorf spoke about upgrading PHP as a big problem. Much bigger than upgrading particular frameworks. Many WTF namings in PHP are just for BC sake. I struck me, that there is much more legacy PHP code in every company than there is framework-bound code.

I instantly created an issue at Rector, that deals with PHP 5.3 to 7.4 upgrades. I went full-time on writing PHP upgrade rules - in the train, in the buss, in the plane (the best place to code actually, wonder why).

Today I'm proud to announce 7 new Rector levels that were not here a month ago:

I finally looked over my small framework bubble and learned a lot about problems of the world PHP community.

How to ereg Correctly?

One example for all:

Don't reinvent the wheel! Did you know that 8 years ago some guy wrote ereg → preg patterns converter? That some guy is Kang Seonghoon and helped hundreds if not thousands of people to not to give a fuck. Including me. Amazing work and I learned about it just by accidental googling. I wonder how many hidden gems are out there.

Take the Rector out, run it on your code, let it fix what it can and report the rest you had to do manually in the issues. Maybe it can be automated. You'll be helping each other developer, who upgrades the same PHP version you did. Imagine PHP version 5.3 would be shipped with set like this, covering 100 % of all changes. It's up to us to make a brighter future now.

Read next → Do you Autowire Services in Symfony? You can Autowire Parameters Too