Symfony is by far the best source to learn about the monorepo practice. I learned most just by looking into it's composer.json - monorepo and package one.

"So I get unstable dev dependencies to my project by installing symplify/*?"

No! These section are root-only. The most known is require-dev and also: 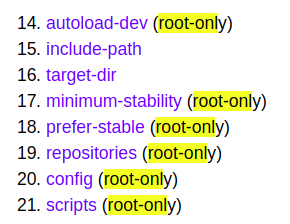 When you install a package, e.g. composer require symplify/easy-coding-standard --dev, you won't download PHPUnit even if that package has it in require-dev.

"So why is this needed? Do these monorepo packages use unstable versions?"

Of course not. When you install any package standalone, you'll get stable dependencies. It's not even possible to install dev dependency without explicitly saying that (e.g. composer require symplify/statie:@dev).

What is Branch Alias for?

Do you think it will install composer require symplify/statie:5.5-dev? No.

Is that clear? Good.

"So what the branch-alias and the minimum-stability have in common?"

The main goal of all this magic is simple. To use the most recent mutual dependencies. E.g., I added a new feature in the monorepo that changed the code of symplify/statie and symplify/package-builder.

When the monorepo is split, the dev symplify/statie uses the dev version of symplify/package-builder.

Let's say we'll release next Symplify version v5.4.2. What we have to handle before it's tagged and released?

1. Bump each Interdependency to the Release Version

4. Bump the branch-alias if Needed

In case we'll release 5.5 in the future, it would look like this:

Now we can continue committing and packages will always use last committed code.

"Monorepo is Hell of Work"

← You must be thinking right now. Well, these steps are basically find and replace - perfect weak spot to automate. All these 4 steps can replace single command from Symplify/MonorepoBuilder:

Read next → 2 Files that Your Symfony Application Misses