Don't Show Your Privates to Public

With typed properties in PHP 7.4, there comes a natural tendency for using properties as public. The type check is already there, right? It's a dangerous path that opens the door to static code with public properties everywhere, that is asking for a change in any place.

But is that ok to show privates to the public? 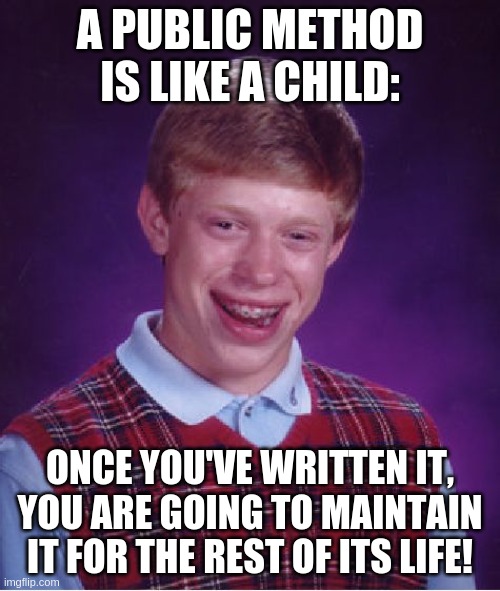 How Many Public Methods Has Your Project?

That meme had just 1 public method. But what about real projects?

To get real numbers from a real project, I run phploc to measure size of Rector's code.

These are the results:

Let's put 100 children in one square:

Good luck with getting all your 2 000 children to university... or bed ... or make them breakfast for them... for one day. No pressure, right?

How to Take Care for as Few Children as Possible?

We want to reduce the number of public methods to a minimum. How?

1. A Method by Method Human Refactoring

We can go for a method by method refactoring with careful analysis if the method should be public or private and how we can change it to private. It takes time, patience, attention, human performance and doesn't scale on massive projects. That's way too expensive.

What simpler way can we apply today on an any-sized project? What low hanging fruit can we focus on?

What is fake public method, property, or constant?

Can you see it?

Same applies for constants and properties, that is used only locally in the class they're defined in:

The most common false publics are constants because they're last that got visibility in PHP 7.1.

Why Should We Care about Privatization?

"Nice intellectual exercise, Tom, but nothing more," you may think, and close this post and go back to your quarantine work.

But remember our children:

A public method is like a child: Once you've written it,
you are going to maintain it for the rest of its life.

What happens if we don't care about it? Well, public element is designed to be used somewhere else.

Same way static method is a method to be used everywhere (and then slowly kill you/).

It's easy to spot now because we focus on ten lines of code, we knew that's a controller method only, and that's a clear miss-use. But in the real world, we don't have so much time to think about 10 lines of code.

Limited attention span is one of the reasons. We had plenty of such potential legacy back doors in Rector:

Another reason is that the method is completely unused, but PHPStorm won't tell you because it is public. When we turned this method into private, we saw it's unused, and we got rid of it: 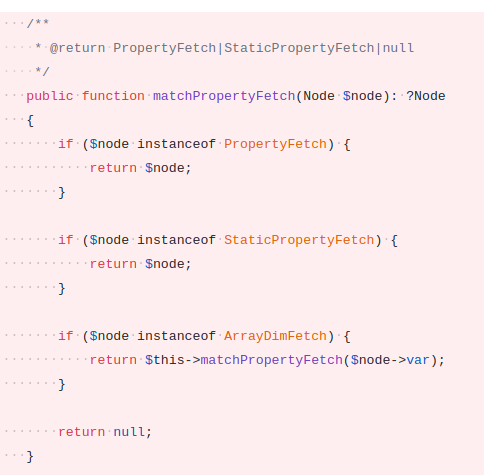 The effect of privatization is surprising. Take this case:

How can the privatization of methods lead to more code? Easily. The method was public, but never used. After Rector run it was private, but never used and then removed... and that could work.

Actually, that was not a feature, it was a bug. This method should have been used many months ago. So we used it in the right place, the feature was complete, and potential future bug.

Do you want to know all the possible code changes?

In CI pipeline, or Won't Happen

What now? Go to your code and check method one by one clicking on them in PHPStorm to Find Usages, if they're used somewhere else or false public and should be private. It will make your code much more robust and senior...

Do you have an idea for another privatization rule? Let us know on GitHub.