A Week in a Life of Employed Open‑Source Developer

Would you contribute an open-source project if it would help your private one? How do you measure such cost-effectiveness? Maybe it's better to fork the package to your own or create your single local service. But who will maintain it and write a test for it? Who will upgrade it when PHP 8 is in EOL?

I want to share my point of view on prisoners' dilemma, which you maybe know from your daily work.

We are almost finished with upgrade to PHP 8. We already migrated our custom @annotations classes to #[attributes] classes and upgrade whole code base to new PHP 8 syntax.

Why do we want PHP 8 attributes instead of annotations everywhere?

But you know what they say:

"Upgrading your code is a piece of cake,
the Devil is in the vendor."

The Devil of Upgrade

I think you knew this from your project. You've added a feature or changed behavior. Everything works. Just this tiny file has one bug that you need to solve. Too bad it has /vendor in its absolute path.

What do you think about when you see this code?

These questions seem like a decent topic to think about in the evening over a glass of smoked whiskey... But they're rather a sign of design smell in our architecture. There should exactly one way to add metadata above methods, no exception allowed.

What happens if there is an exception and we have at least two ways to add metadata? Cognitive dissonance kicks in, and we can use whatever we want anywhere we want:

Too bad our project only supports attributes now, and @OurAttribute is silently ignored. It will cause the server down on Saturday morning and make a couple of families very happy about having their developer half work a whole weekend to figure this out.

Now that we've made clear attributes are the only way to go:

First, we have to make sure the @ExternalAnnotation supports attribute syntax. The PHP 8 is out for 8 months now, so someone else must have already done it. After all, it's as simple as adding an #[Attribute] above each annotation, right?

I expect that the whole open-source world
is here for me only to solve my personal problems.

I've checked the apitte/core package we used for annotations and found out. It does not support attributes. Hm, what now? There is an issue from January 2021, but that's it. I've decided to contribute back to the package developers and maintainers... and clicked on the 👍 button under the issue.

Oh no, life is not aligned with my wishful thinking again. What now? Maybe it's time to give up and teach my teammates a new exception they only have to remember: "The A, B, and C are always attributes and D, E, and F are always annotations."

I liked this option initially, but then thought of being paid for adding my coworkers more meta-work, making them logarithmically more expensive, which seemed a bit embarrassing for me.

What other options do I have?

Maybe I could add this feature to the apitte/core package? Hm, I haven't worked with Nette open-source for the past 5 years, so that it will require some temporary learning - the worst use of my brain cells if you ask me. Well, if it's adding an #[Attribute] above each class, I think I can handle it.

This is how the pull request looks in my head:

I'm daydreaming about the fame and glory I will receive from the PHP community just for the 10 minutes of my work. Let's do this!

I fork the package, create a pull request, learn how to run the make X command, and send the pull request. I'm thinking, hm, maybe I should add a test to guarantee my contribution works and make the maintainer more open to merge it. I don't want to bother them twice just to ask me for a test.

I made this plan happen and run the test. Nothing. It seems no attribute classes were found. What is wrong? Everything is 1:1. Just instead of @SomeClass, there is #[SomeClass] - this must work! I run just a single test for a single attribute, only to confirm the previously failed result.

I do a bit of reflecting on a toilet and have an epiphany - there is another vendor package that handles metadata reading. The Doctrine\Common\Annotations\AnnotationReader service!

I'm thinking... the Doctrine annotations are dualistic - there is one class for Entity, you don't have to change anything:

The annotation reader follows the logic. Maybe it has a different name, but that it:

This logical exception caused me lose my sanity. Almost, but instead, I've decided to look for some reader package that would understand both annotations. There is some advanced reader in doctrine/orm, but we don't use Doctrine and Symfony, so pulling so many new packages just to read simple attributes was not an option.

A Package that Reads both Annotations and Attributes

After a bit of googling on packagist, I've found Koriym.Attributes package. I hope the name is not as precise as `doctrine/annotations' This package can read annotations.

My expectations are that I install this package to apitte/core, replace the reader with this one; it will work for both annotations and attributes. I love the naivety of my younger self, but we still got some time to get there.

I've replaced the package and run the tests. Nothing. What is going on? Is the koriym/Koriym.Attributes package broken? I check the tests of the package, and it looks fine. This use case should work. There is one more surprise lurking...

How do you think an annotation class looks like for this use case?

In reality, it's closer to:

Hmm, so how can I make dualistic annotation/attribute in a single class? Attributes must use named arguments to make the most out of them:

Do you know, there are 3 ways to create an annotation class. But only one of them is compatible with attributes and only supported since the doctrine/annotations version was released this summer. Which one is it, and how to make it happen? You can find out in Doctrine Annotations and Attributes Living Together in Peace.

I realize how this used to be so simple in my head before I knew anything about this topic... I guess that's what stupidity is.

I have to refactor every single annotation class. Not just their constructor, but also the logic they use inside. We have 2 pull requests to apitte/core now:

The latter PR is pre-step, so using low-hanging fruit of least surprise, I've pushed it to be merged first. If you can, always use these pre-step PRs to make the feature PR much smaller and easier to review.

How to Test Pull-Request Before Merge?

Now we have two pull-request with code changes. Tests are passing, PHPStan is passing, coding standards are passing... that should be enough, right? There is one more important test - in our actual project.

Usually, we have to wait for the feature to be merged and tagged before using it.

Are you highly impatient like me? Then you can require a merged dev version:

But what if there are some bugs in the pull request? Can we wait till the PR is merged to the main branch? No. We want to try them right now. Luckily, there is an easter egg in the composer that makes this simpler. You probably know we can require a specific hash of `dev-master:

Then use this hash next as a version in composer.lock:

This versioning is much-preferred to dynamic dev-master, that always take the latest version. The latest version can change in time, but the hashdev-master#d38ga8gb` version always points to the exact commit. It's like a tag for poor people.

So how is using dev-master in specific hash useful? Now we'll find the easter egg: 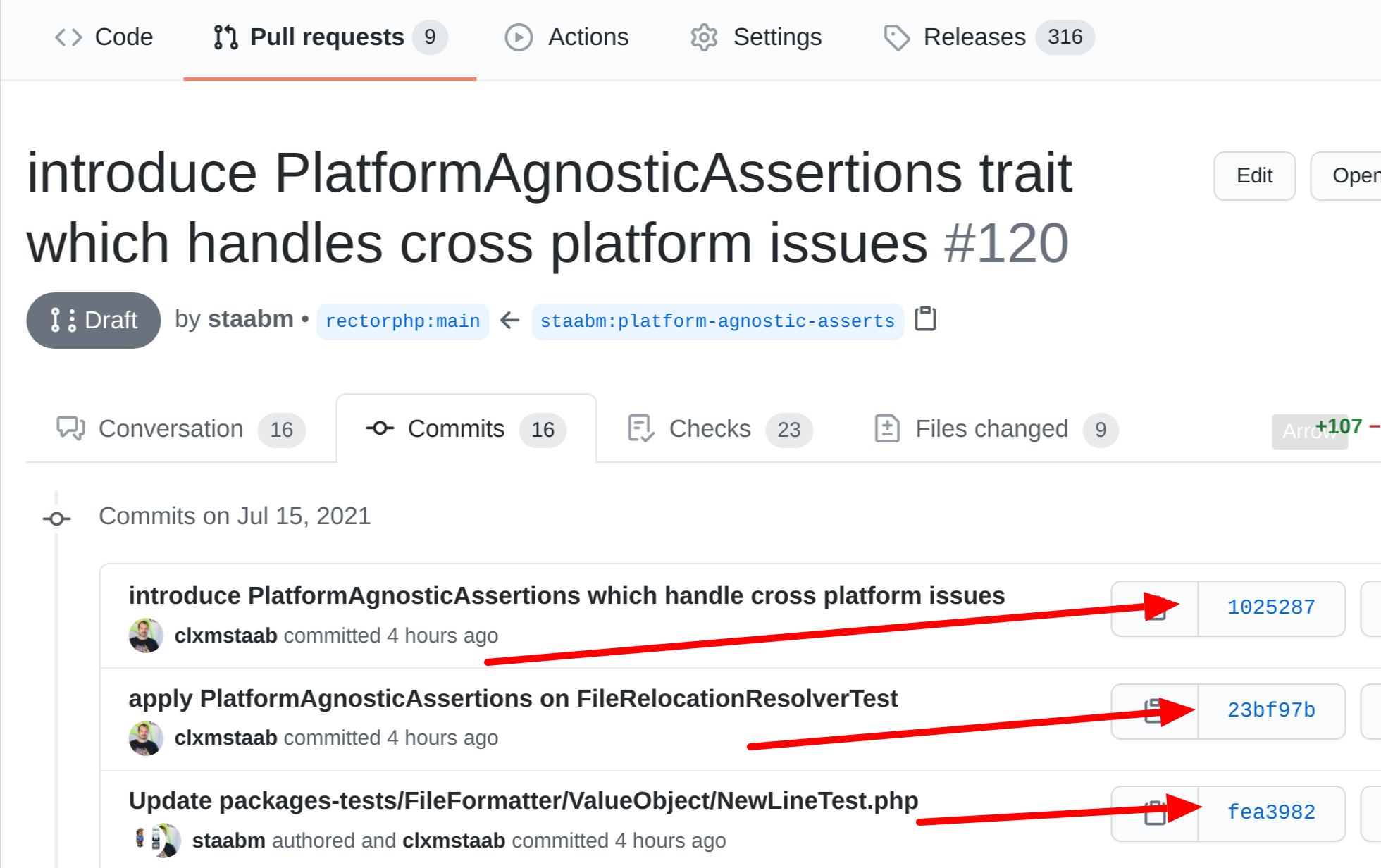 We can use hash in pull-request the same way with `dev-master:

The composer will install the exact commit from the pull request!

This testing found at least five bugs that we would discover only after merging the pull request!

The appetite/core annotations and attributes now work in the dev-master. I hope Milan will tag the next version soon to remove dev-main from our composer.

Good, now we have the tools ready, apitte/core is up to date and ready. I can finally start the refactoring that seemed "so easy" a few days before. The safest refactoring is one class at a time, try it, test it and then merge it. If everything works, we can refactor 2 more classes and so on.

This way, the first pull request had a bunch of annotations and attributes above the same method:

Technically this should work, at least by my expectations. Too bad the CI disagreed with me.

I debug the apitte/core and then koriym/Koriym.Attributes reader a bit. It seems the reader only returns attributes, no annotations. I assumed that it reads both annotations and attributes at the same time together. But the tool is a bit different.

I first fixed this by making a custom reader class in apitte/core. A few hours later, I realized this might be changed directly in koriym/Koriym.Attributes. I tried to avoid it, as it requires learning the practices and conventions of yet another package.

But it is the right way to go, to keep one responsibility per package. apitte/core should not care about the reader. Its value is in connecting read annotations or attributes together to resolve API requests.

So I proposed a pull-request there. After 3 days of very active feedback from Koriym, the pull request was ready. Thank you, Koriym, for the attention and time you gave me.

One risk of contributing to an open-source project is frustrating response times for both parties.

Usually, there is no timetable for getting a response from the maintainer. You don't know if they respond in 10 minutes, today, or in 2 weeks. Sometimes maintainer can respond in a matter of an hour, just to point out the CI is failing. You fix it, push it a matter of 10 minutes. But then you wait 5 more days for another reply. But that's part of the deal, and when it works out, it's a great unique feeling of compassion across time zones.

We're heading to the end. With two open-source packages, 5 pull-request later, my expectations are met. I'm happy. If I came to this problem today, I would only use the packages without any surprises. I hope this team effort will make this experience smooth for everyone else in the same situation. Thank you, Milan and Koriym, for your teamwork with a narrow focus on what is essential for the package's sake.

"Contribute the changes to open-source
you want to see in the world."

Apart from the new features in the 2 packages and our private project, I feel like I had a great time with 2 friends. We were talking about code, but also coding techniques and one's approach to life.

In a code, you can often see more than meets the eye. We can see if the package has clear naming, neat and easy-to-understand README, or a simple design. It's the door to the writer's mind.

Read next → How to Scope Your PHP Tool in 10 Steps